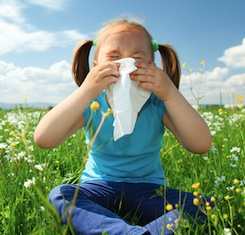 What Nannies Need to Know About Allergies

The Journal of Allergy and Clinical Immunology published a study showing that the rate of peanut allergies in children has tripled between 1997 and 2008, as well as a 2012 study that indicated a correlation between antibacterial hygiene products and an increased likelihood of environmental allergies, which have also risen steadily over the last decade. The rapidly rising number of children with food and environmental allergies forces nannies to make a concerted effort to inform themselves about the various triggers of and treatments for them. The likelihood of having at least one charge in your care that suffers from allergies with potentially serious side effects is great enough that a professional nanny should make every effort to learn as much as possible about these conditions.

Food Allergies
Milk, tree nuts, peanuts, eggs, soy and wheat are all common allergens; unfortunately, they’re also so common in commercially-available foods that nannies must be vigilant in guarding their allergic charges against exposure. Even a small amount of a substance that a child is allergic to can cause swelling, rashes or life-threatening anaphylactic shock; as such, childcare providers should not only read labels closely and examine the ingredients of any food product before giving it to a child, but also be well-versed in the best treatment to administer in the event of accidental exposure.
Parents of children with allergies will almost always provide their nanny with a list of foods to avoid and instructions for treatment, and may even specify acceptable daily menus in order to control or limit allergic reactions. They’re also unlikely to stock foods that their child is allergic to, making the most risky dietary situation one that occurs when the child is having a meal or snack outside of the home. Restaurant menus may not always include complete allergy information, so nannies should be careful to ask pertinent questions about a menu item that the child wishes to order. Additionally, group outings or play dates in which one parent or caregiver provides snacks for the entire group can also present a challenge. In order to reduce the likelihood of an irritating food being introduced to your charge’s diet, it’s advised to make an effort to contact the adult who is assigned to snack duty in advance so that she can either eliminate allergens or prepare an alternative snack for allergic children. In these group outings, kids should be discouraged from sharing snacks or lunches they brought from home, despite the long-standing childhood tradition of switching food. Meals prepared by the parents or nanny of a child without allergies could contain foods that cause a reaction to a child who is allergic, and very young children may not realize the importance of avoiding those foods. Nannies shouldn’t introduce any new or untested foods to their charges, even if they haven’t presented symptoms of any food allergies, as reactions can be quite sudden and very severe. Learning when and how to properly administer epinephrine as temporary treatment for anaphylaxis until emergency medical attention is available is another wise move, as a situation that demands immediate intervention could easily present itself when children have serious food allergies.

Environmental Allergies
While environmental allergies aren’t likely to have the same severe side effects or reactions that come with food allergies, there are some things that nannies should be on the lookout for. The most common reaction that children with environmental allergies have when exposed to an irritating substance is difficulty breathing. Often, an allergic child’s pediatrician will prescribe an inhaler, similar to those used by asthma sufferers, to make breathing easier and less painful. Nasal allergies, commonly known as “hay fever,” generally causes cold-like symptoms in sufferers, and can include sneezing, runny nose and congestion. These symptoms are often accompanied by itchy or watery eyes and sinus pressure, which can make a child uncomfortable and irritable. There are prescription and over-the-counter medications available to alleviate or diminish many of the symptoms, but nannies should never administer these treatments without the express permission of her employer and a chart on which all dosage information is entered to avoid an inadvertent double dose later. Because there is no known cure for either food or environmental allergies, nannies must establish a clear and strong line of communication with her employers regarding acceptable treatment, along with tips and tricks for symptom management. The two best sources for information regarding your charges’ individual allergies and needs are his parents and his pediatrician; don’t hesitate to approach either of them with questions, as your caution could mean the difference between healthy, vigorous charges and ailing ones in danger of anaphylactic shock.