Which chores at what ages? 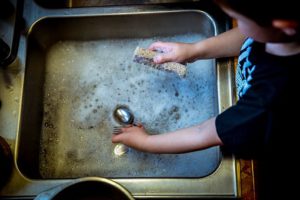 Her TEDx Talk on the same subject, “The Expectation Gap,” discussed how some parents believe their kids are too busy with school and extracurricular obligations for additional chores. Gilboa’s assertions reflect the results of a recent national phone survey of 1,001 Americans conducted by Braun Research on behalf of Whirlpool in which 82 percent of respondents said they regularly did chores as children, but only 28 percent give their own children chores now.

Gilboa says that requiring chores helps produce children who will be “problem solvers of good character.” But which chores are appropriate for children at which ages? Gilboa has resources on her website, and she gave TODAY Parents a shorthand guide:

18 mos-3 years: “This is the ‘me do it myself!’ age, so take advantage of it!” Gilboa says. “You’ll rarely need to ask a preschooler twice if they’d like to do a big-kid job for you.” Gilboa cautions against giving this age group a chore that parents might feel compelled to follow behind them and redo in their footsteps: “That would be a quick way to teach them that they might as well not help at all,” she said. “Let them do one part, like hold the dustpan while you sweep.”

4-5 years old: Kids are entirely capable of doing some tasks alone, but many children this age won’t remember without prompting, Gilboa said. “Hint: tell them to tell you when they’re done,” she said. “This will help to keep them on task, and let you know to check that it was done the way they’ve been taught.”

6-8 years old: Don’t be afraid to give early elementary children daily chores, Gilboa said. “Once a week seems easier, but actually building habits is easier if something needs to get done every day. So a repetitive kitchen chore or pet care can be a great choice,” she said.

And don’t underestimate what kids this age can do, Gilboa added. “One Sunday, a babysitter asked me if she could take our kids to the park while I was at work. ‘Sure,’ I replied, ‘Once their chores are done!'” Gilboa said. The babysitter asked Gilboa’s 8-year-old son what chores he had left. When he replied “laundry,” the college-age babysitter was shocked.”‘You do the laundry? Most of my college friends don’t know how to do laundry!’ she said.”

Gilboa’s son was just as shocked to learn that college students did not know how to do their own laundry. With her help, he created a video for her YouTube channel to teach them how:

CLICK HERE TO VIEW VIDEO AND FINISH THIS ARTICLE.

0
0
0
: chores, Kids
Previous Post The 5 C’s of Disciplining Children Next Post 8 Keys to Successfully Vacationing With Your Nanny